Wasghington, nawacita – House Republican leaders are moving toward a vote on a stopgap spending measure Thursday to avoid a shutdown, but it’s unclear if there are enough GOP votes or if President Donald Trump’s tweets could derail their efforts.

House Speaker Paul Ryan and his lieutenants were up against the clock and their own ranks as they scrambled to lock down votes, and that was before Trump tweeted that a key sweetener for Senate Democrats — a six-year reauthorization of the Children’s Health Insurance Program — shouldn’t be included in a short-term measure.

“CHIP should be part of a long term solution, not a 30 Day, or short term, extension!” Trump wrote in a tweet originally interpreted as disparaging the current proposal to keep the government funded, though congressional Republicans later said the President was fully on board with that plan.

If Congress doesn’t send a bill to the President approving more money by midnight on Friday, most federal agencies will be forced to stop operations. GOP leaders in the House can’t count on Democrats who have said they will not support a short-term spending bill that funds the government into mid-February if it does not include a fix for DACA, the Deferred Action for Childhood Arrivals program that expires in March. That left Ryan looking to pass the spending bill with just Republican votes.

Senate Majority Whip John Cornyn, a Texas Republican, sent a tweet that was seen as a response to Trump’s tweet, clarifying that the short-term measure to keep the government included a six-year re-authorization.

“The current house Continuing Resolution package has a six-year extension of CHIP, not a 30 day extension,” Cornyn wrote.

Ryan said at a news conference Thursday that whipping efforts on the proposal are “doing fine” and that Trump’s tweet on CHIP was not causing “problems at all.”

“I have confidence we’ll pass this because I think members understand, why on earth would we want to have a government shutdown, hurt the military … that is not in anyone’s interest,” Ryan said, adding that he spoke with Trump earlier in the morning and that the President “fully supports” their plan.

“The President supports the continuing resolution introduced in the House,” Shah said. “Congress needs to do its job and provide full funding of our troops and military with a two year budget caps deal. However, as the deal is negotiated, the President wants to ensure our military and national security are funded. He will not let it be held hostage by Democrats.”

A White House official told CNN that the President is putting pressure on Democrats over funding the government, highlighting the impact on the military of failing to fund the government during his visit to the Pentagon later Thursday.

“We do feel good” about the the prospects for the short-term funding bill the House will take up Thursday, the official said. But this person noted that they recognize that it is a “tough vote” for Republicans. These comments came before Trump’s CHIP tweet. Republicans, including those inside the Trump administration, had planned to use funding for children’s health care program to woo Democratic votes for the short-term spending bill.

Asked whether Trump should be held responsible for a shutdown if one occurs, the White House official noted that Trump has been advocating for funding the government, and especially the military, for weeks.

“Should he be held responsible for a shutdown? I don’t think so,” the official said.

How will conservative House members vote?

For House Republicans, some of their own conservative members are still a major question mark.

House Freedom Caucus Chairman Mark Meadows, a North Carolina Republican, is one of a small group of conservatives opposed to the short-term funding bill and told reporters Wednesday he didn’t believe GOP leaders had the votes to pass it because of the internal divisions. He didn’t rule out supporting it, saying he spoke to President Donald Trump and met with the chief deputy whip, Rep. Patrick McHenry, a fellow GOP North Carolinian. 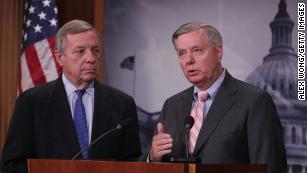 Asked about Meadows’ saying he’s a no and others in the Freedom caucus planning to oppose the bill, House Majority Leader Kevin McCarthy of California tweaked his GOP colleagues, saying “they want a shutdown? I don’t think they’d want to shut down.”‘What other choice do have this week’

While reluctant to pass yet another short-term continuing resolution or “CR” — the fourth in just months — many rank-and-file members seemed mostly resigned Wednesday to the fact that it was the only option, even if they were not happy about it.

“What other choice do have this week,” asked New Jersey Republican Rep. Tom MacArthur. “I’m certainly not going to vote to shut the government down. That’s irresponsible.”

During a closed-door meeting Wednesday morning, GOP leaders made the pitch that the stopgap bill was the only path to keeping talks going on a broader budget deal and a separate effort to come up with a bipartisan compromise on DACA. Without a unified Republican conference heading into that vote, leaders would be forced to give concessions to Democrats in order to get their support and avoid any shutdown.

“There seemed to be a consensus with the cards that we have that this is the best way to play it,” North Carolina GOP Rep. Mark Walker said after the meeting. He called the latest short term bill “a proverbial crap sandwich,” but said at this juncture he supported it.

As the afternoon wore on and leaders surveyed GOP lawmakers, one member of the Republican Whip team told CNN that things were going in the right direction.

Republicans added sweeteners to the bill, hoping to make it tough for Democrats to oppose it. Besides CHIP, they also delayed some taxes from the Affordable Care Act — one on medical devices and another on high-cost, so-called “Cadillac” insurance plans, which they believe it would be tough for those Democrats in swing districts to vote against.

House Democratic leaders are urging their members to oppose the measure because it fails to address DACA, according to Democratic sources.

But Ryan still had work to do with the conservative House Freedom Caucus.

Ohio GOP Rep. Warren Davidson, a member of the Freedom Caucus, told reporters he’s undecided on how he’ll vote. But he blasted Democrats for their position, saying, “they’re picking 800,000 people who brought them here illegally versus our troops and that is very frustrating so we have wanted to have this money to our troops since October 1, meanwhile our troops aren’t getting this money.”

Pressed what he and other conservatives are asking leaders for, Meadows said they are pressing for more details on the big picture plan going forward. “At what point are we going to have a plan on where we land or are we just going to hope that February 16 is better than January 19 because it’s in a different month?”

In the Senate, it was still unclear exactly how Majority Leader Mitch McConnell would manage to get the votes. McConnell, unlike, Ryan needs Democrats. And many Democrats were keeping their powder dry as to how they would vote, waiting on the House to lay their cards on the table and prove they had the GOP votes on their own to pass the continuing resolution. 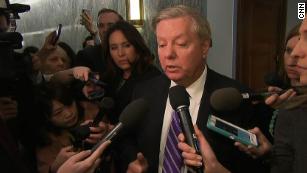 Senate Democrats are also caught in a tough spot. A handful are running for re-election in states where Trump handily won in 2016. Red state Democrats don’t want to run the risk of being labeled as responsible for a shutdown.

But others are under pressure from their liberal base who mobilized when lawmakers voted for a short-term spending bill last time around.

Several Democrats who voted for the last continuing resolution including both senators from Virginia and New Mexico announced in the past 24 hours that they would vote against this current proposal.

Others say they are just tired of the whole exercise: Congress using short-term spending bills to kick the can down the road only to return to do it again a month later.

This story has updated with additional developments and will continue to update throughout Thursday.